All Insights
Broadstairs Oaps Are Getting Jobs And Downsizing Properties To Beat The Cost-Of-Living Crisis
15/09/2022 12:00 AM 0 0

As a backdrop, the number of working 65-year-olds and above has been increasing since the mid-nineties when 307 Broadstairs OAPs were employed. Yet, July's figures were the largest monthly jump on record by quite a distance.

Looking at the changing property market, I have been speaking to many Broadstairs OAP homeowners who are having to bring their downsizing plans forward several years to survive the cost-of-living crisis. The money generated from the downsizing will cover their housekeeping and massive energy bills.

So why would someone want to downsize? Mostly, their homes are too big for their needs as their children have flown the nest decades before. The government classifies a property as under-occupied if it has two or more spare bedrooms.

How big is the under-occupation issue in the UK?

Of the 4.52 million British homes owned by those aged 65 and over, 3.04 million have at least two spare bedrooms (i.e., under-occupied). Looking locally…

Well, to start, it's holding back Broadstairs families that need the bedrooms and space these larger houses offer if the older occupants won't move on. Also, these larger homes cost more to run in terms of energy bills and other things such as building insurance and council tax.

From October (even with the recent energy bill cap) it will cost on average £354 per month in gas and electricity alone for a large Broadstairs 4-bed detached home (where occupants are home all day).

So why are there so many mature homeowners in their 70s, 80s and even 90s still living in houses that are too large for their day-to-day requirements? There are several reasons for this. One is the obvious emotional attachment to the family home they have often owned since the 1970s and 1980s. The second is to escape the hassle and costs of the house move, and finally, the small number of suitable Broadstairs properties for them to buy to attract them to make a move.

So how much could mature Broadstairs homeowners gain by downsizing?

The numbers are intriguing when looking at the average difference between the sale price and the subsequent purchase price of the average downsizer.

Broadstairs downsizers could unlock an average of £144,890 per household.

Not only will Broadstairs homeowners earn this lump of cash for their extended retirement, but they will also save themselves around £176 per month in lower energy bills, buildings insurance and council tax bills.

So, what are the options for mature Broadstairs homeowners?

Waiting 12 months to make a move might mean you are putting your Broadstairs home on the market as every other OAP homeowner puts their home on the market, meaning the dynamics of the local property market will probably be a lot different. Thus, the equity you release on the downsize could be much lower.

Yet some of you will be worried about finding your next home. Not to worry.

At our agency, we do things differently than many other Broadstairs estate agents. We can find you a buyer, then put everything on ice and go and find you a property to buy. We guarantee you won't be made homeless if you or we can't find another home for you to move to.

We call it peace of mind. If you would like a chat about this, without any obligation, feel free to call Damien Cooke 01843 231833. 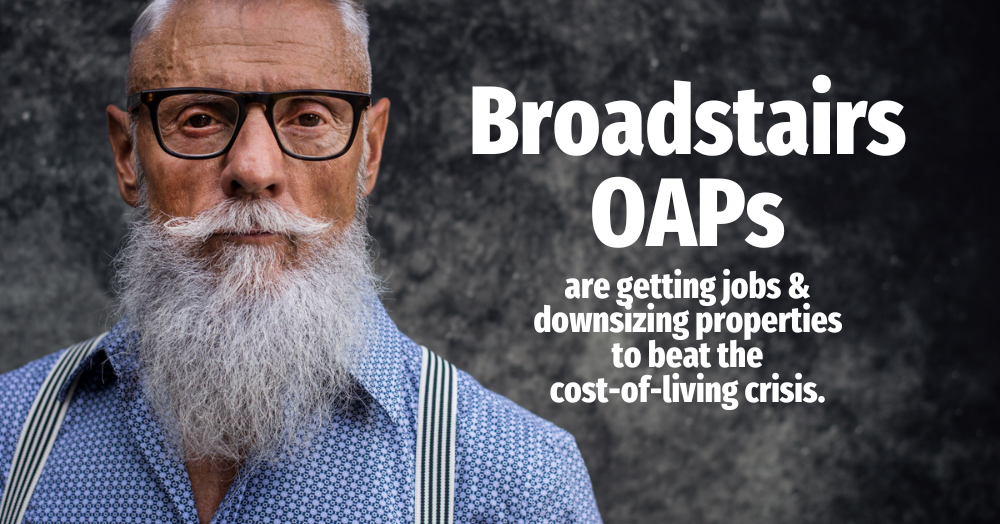